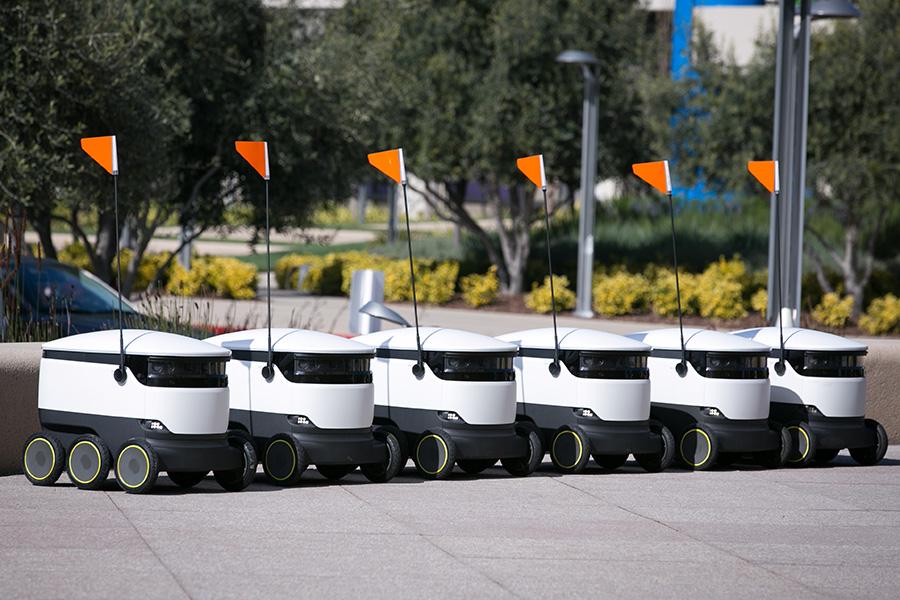 Starship is a robotics company that was launched in 2014 by co-founders Ahti Heinla and Janus Friis. The company develops small, self-driving delivery robots that are used to deliver food and packages from grocery stores and restaurants. By combining mobile technology, autonomous robots, and partnerships with stores and restaurants, Starship aims to make local delivery faster, smarter, and more energy- and cost-efficient.

Starship delivery robots are advanced devices that can navigate paths, streets, and around obstacles. Tens of thousands of autonomous deliveries are made daily around the world, and as of February 2022, Starship had completed over 3,000,000 autonomous deliveries. So far, the service has been launched in the Unites States, United Kingdom, Germany, Estonia, and Finland, with a special focus on college campuses.

As a customer, you simply download Starship’s mobile app, place your order, and wait for the robot to arrive. The robot’s location and whole journey can be tracked on your phone, and for safety reasons, only you can open the robot using the same mobile app.

See the Starship robots in action:

Preparing for further growth with NetSuite

Starship is the first company to deploy robots of this kind in public spaces and are looking to revolutionize the way that deliveries are made by combining advanced technology with excellent service.

Having grown rapidly and anticipating even more growth, Starship was looking to unify their ERP solutions, get consolidated data and be prepared for future expansions and additional processes. Starship was already familiar with NetSuite as it had been used for some parts of the company and decided to do a new implementation of NetSuite for the whole Group. "We decided to implement NetSuite because we needed a system to give us control over the whole Group now, at the same time, so we are prepared for future expansions as well as further processes", says Adrian Suarez, Head of Finance at Starship.

Starship implemented NetSuite for group consolidation and financials for 6 countries in only 4 months. "With Staria’s help, we were able to import every historical transaction into the new system, not just year end trial balances", Suarez says. Together with Staria, Starship is now planning for the next phase and for more processes that could be included or automated in NetSuite.

A smooth and fast implementation

"The implementation was relatively smooth. We were blessed with a Rockstar project manager from Staria’s side, who always kept us on time and budget. We felt the usual pain on the customer side when implementing an ERP: time allocation to the project vs. to our regular jobs. However, the Staria team was eager to help whenever we needed", Suarez comments about the implementation project.

“This is for sure one of the fastest implementations I have been a part of considering e.g. the number of countries and currencies. It would not have been possible without the huge commitment and dedication from Starship’s finance team and the great co-operation we had between Starship and Staria”, says Jimmy Löfström, Staria’s International Growth Director.

In addition to NetSuite, Starship has also implemented Staria’s Estonian localization SuiteApp and are reviewing other Staria solutions and services for future needs.

As an international company, Starship was looking for an experienced and versatile NetSuite partner who understands global growth. "Staria has an impressive list of previous clients and has been around for quite some time. Additionally, the fact that they can offer professional accounting services in multiple countries was a plus when deciding who to go with", Suarez says.

Post-implementation, Suarez comments that "One of the biggest benefits of working with the Staria team was their experience. We’ve used NetSuite in the past but were not aware of best practices. They took the time to learn about our processes and make recommendations where appropriate. Consolidating accounts at month end went from a few days to a few minutes after the implementation".